Hi Guys. Since my last installment on this project which was early February we’ve had a lot to deal with. Plumbing seems to be a continuing theme for this one. Working with an old building and having an apartment directly below makes the build challenging.

Following on from the last update you may remember that we discovered we couldn’t put the laundry where we wanted to and we decided to place it in the larger bathroom rather than compromise the kitchen design.  However, when we pulled everything out we soon saw that to make all of the new plumbing work we needed to raise the height of the bathroom floors. This wasn’t a problem as we have such high ceilings however it’s a big decision as it really does impact of the flow of what is a smaller 2bedroom apartment. Plus, we had to replace every single piece of pipework, nothing was up to standard.

We spent time considering all alternate options but to get the best layout this was the only way, it’s delayed us by about 2 weeks as we had to redesign some of the spaces, but we’re back on track now. Take a look at the below plumbing installed last week and the framing for the new floors, this is 2 bathrooms, there will be a portioning wall built between the 2 this week. And as the Ensuite bathroom doesn’t have any windows on the external wall we have decided to install a window at the top of the portioning wall between the 2 bathrooms the full length of the wall. This will shed some much needed natural light into the new space. Bathrooms start of demo and after initial plumbing rough in. Because we don’t have a laundry in the kitchen it meant we could really open up the old pantry space and make it even bigger and better. Taking advantage of the height of the room you can see here we took out nib walls either side and we’ve made the opening taller. This will allow for an awesome built in pantry with a combination of drawers and shelves. 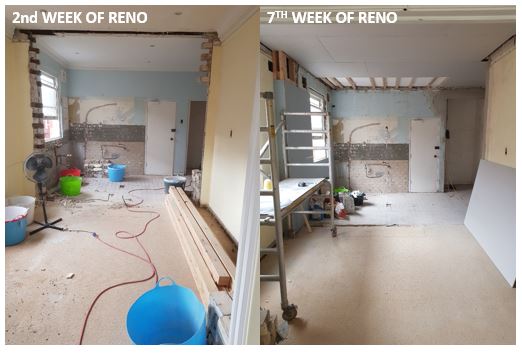 Kitchen in demo with walls opening up, and half way through reno, with walls all open, pantry opening made bigger and ceiling repairs. 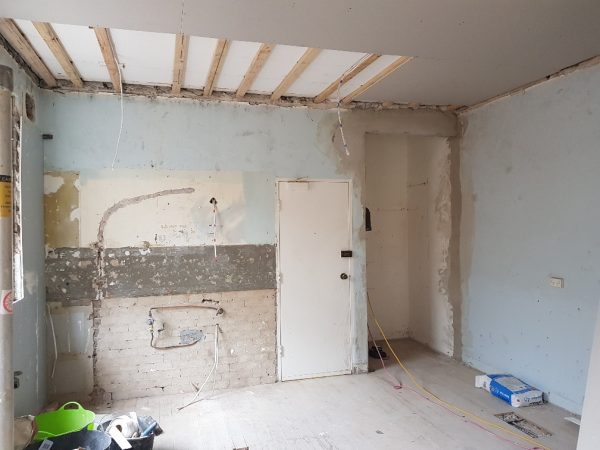 It was a real win to be able to widen and make taller the pantry opening.

As you can see from the photo’s we’re still right in the middle of construction. But we’re past all of the decision making now and its full steam ahead into putting the apartment back together. Our cabinetry check measure has already happened for the kitchen and robes and that’s cupboard in the entryway that you can see in the pics (no backing on the cupboard as yet!). We’ve also found good matches to existing cornicing and having skirtings custom made so we can tie everything in for each room, I counted 5 different cornices in the original apartment…wow!

Get ready for the next installment, the bathroom may be tiled by then and we’ll have the kitchen cabinetry going in.