After living in Sydney for over 10 years I thought it was about time I went to see the Archibald exhibition this year. I’m sure most of you are aware that this is an iconic Australian exhibition that invites artists across Australia and New Zealand to showcase their portraiture work encapsulating the changing face of Australia.

Jules Francois Archibald was the founding editor of The Bulletin and made huge contributions to the development of a distinctly Australian style in terms of literature and graphic art. He died in 1919 and his bequest funded the creation of this major portrait painting competition. Having studied Fine Art and Art History I have a real appreciation for how hard portraiture work can be. Not only is the artist trying to capture the subjects visual characteristics it would be meaningless if the personality of the subject didn’t shine through also.  What’s fascinating is that many of these artists only got to do one short sitting with the subject, the rest being painted from photographs. This year’s winner was a portrait of Barry Humphries painted by Louise Hearman. I can see why it won, the piece really projected Barry into the onlookers space, using a black background and Barry wore a simple white shirt the whole portrait jumped out of the canvas. And with the added half sequin stuck to Barry’s right eyebrow, that hint to his alter ego – of course Dame Edna Everage – the piece had a sense of humour about it. However this wasn’t my favourite portrait in the exhibition. I couldn’t help going back to a portrait that was installed right at the beginning of the exhibition. I found this piece fascinating as every time I went back for another look I noticed something new. It was pretty amazing. This was a self portrait painted by Michael McWilliams. His point was to paint many of the species that have been introduced by humans but have gone on to become pests or affected the land in some way and had huge environmental impact. This piece is reminiscent of the work of the 16th century painter by Giuseppe Arcimboldo.  It’s fantastic to see that modern art is still hugely influenced by fine art from the masters. 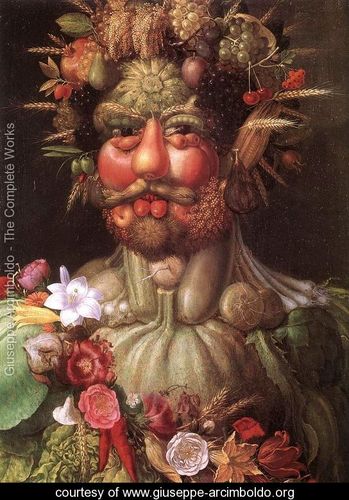 Example of the work of Giuseppe Arcimboldo

Take a look at the exhibition online, I believe everyone has an opinion about portraits, especially when they portray personalities that many of us are familiar with. http://www.artgallery.nsw.gov.au/prizes/archibald/2016/

← Dressing a bed like a designer The Block – Kitchens Week →