The Block has been through bathrooms, hall-ways, common areas, master suites, guest rooms and now… kitchens.

Last night’s kitchen reveals and judging were significant for three reasons:
1) kitchens (and bathrooms) sell properties
2) We can now see the full designs of each apartment, and
3) This was the last room; it’s just the terrace too go!

Judging was tight, all teams scored highly but joint top honors went to Karlie and Will, and Dan and Carleen; both getting 30 out of 30. Which was ironic as they spent much of last week bickering. (Can’t wait to see what happened in the shared overnight stay) 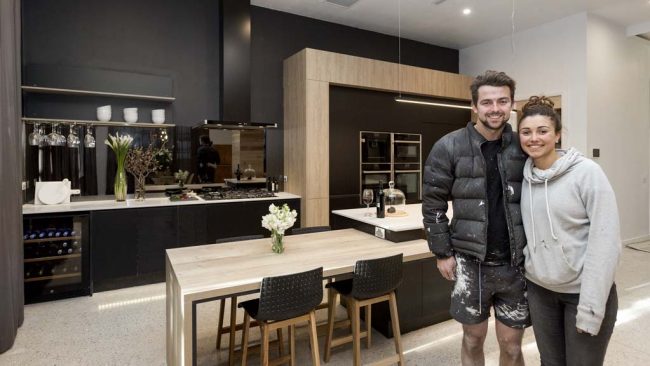 Karlie and Will’s kitchen looked amazing, and you could really see the chic contemporary “in-deco” style come together. The overall aesthetic seemed to energize the judges, especially with the finished polished concrete floor, which complemented the colour palette.

The kitchen space (including butler’s pantry) was well planned and their choice of black was sophisticated, which they also picked up in their styling… although I thought the truffles were a bit much! Shelving was the only concern, but clearly a minor one hence the perfect score.

I loved the stepped down breakfast bar with the waterfall timber, it broke up the island and gave it a very now feel.

Karlie and Will’s overall design is stunning, with key accents (such as natural timbers) used subtly to reference different areas / zone and bring theme together. They have also touched on the heritage without being kitsch, which other teams have failed at.

Theirs is by far the stand out design. 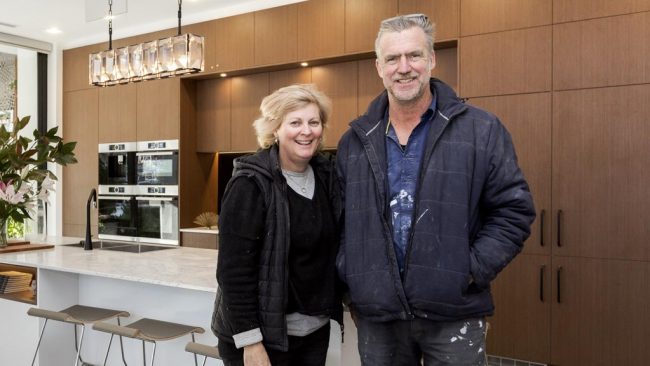 Equal top marks went to Dan and Carleen who didn’t finish last week. This was clearly a motivator, as they were (not for the first time) first to finish. Clearly the judges were impressed with glowing comments around: cabinetry; an understated feel; and luxurious simplicity.

There’s no doubt that the kitchen was amazing and that it complements the living space well. However, I feel the whole apartment has two styles
1) Grounded/traditional contemporary, i.e it doesn’t push boundaries, and
2) Their take on an art deco restoration.

As such I struggle to see the overall flow in the design and what sort of buyer it’ll attract. 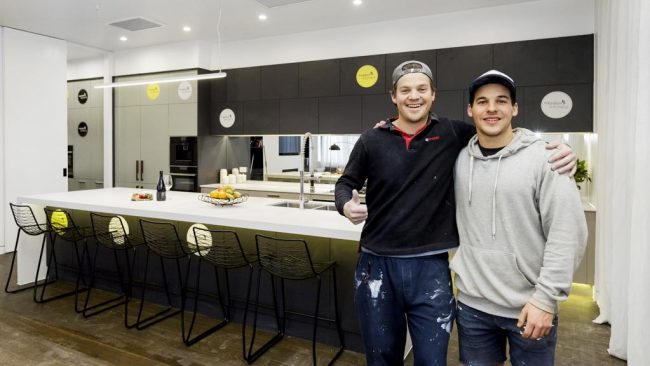 Andy and Ben pulled off a solid second place but missed out on the prize money by one point, meaning they’re officially broke!

Contrary to their budget problems, and thanks to a very understanding builder, the kitchen pulled together their masculine party feel for the living area. The offset cabinet panels were a nice touch and colour choice was good, it was also the third huge butler’s pantry in a row.

The boys always swing for the fences rather than focusing on the long game… which means the outcomes can be somewhat binary: a hit or a miss! And for me, overall, it’s a miss. Whilst I see a market for this I can’t see it making top dollar on sale day. 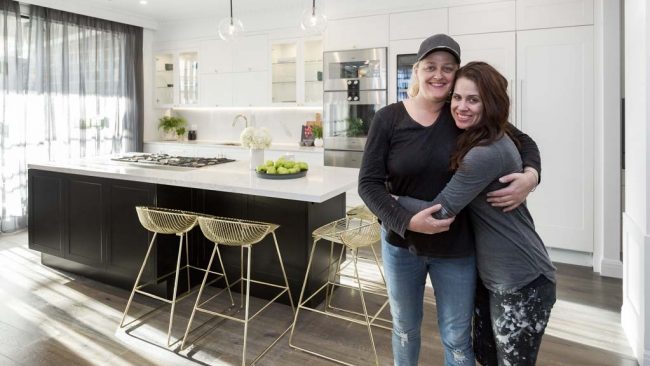 Julia and Sasha have an effortless style which screams Melbourne and luxury… their kitchen was no different. I was surprised to see the shaker style kitchen, but it played second fiddle to their James Bond appliances upgrade, which will add value to their sale price.

The kitchen, as with Karlie and Will’s, flows with the living space expertly. And with their hard-fought view of the Melbourne skyline, this has the potential to bring home the largest sale price, as the agents picked a few weeks ago. 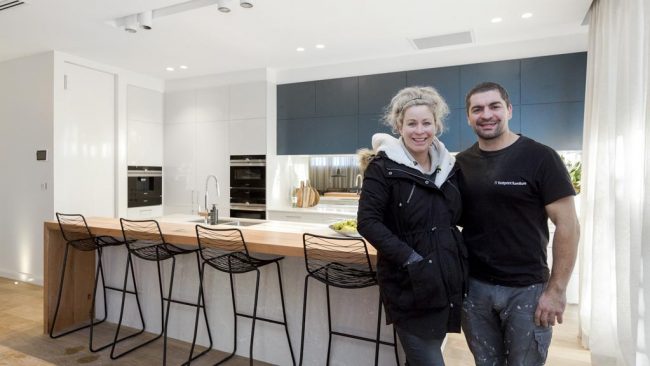 Kim and Chris…bless them… are still using beautiful single elements but either not mixing finishes well or not quite nailing the delivery. They, in fairness, got a very respectable 26 out of 30, and got some excellent comments. But it wasn’t enough…

I kitchen was disjointed, especially the step up in height from the kitchen counter to bar, and the materials just didn’t gel. This is really apparent when you compare an apartment like Karlie and Will’s.

As with all the areas from this Newcastle couple, it’s close but not quite there. Shaynna summed it up perfectly, “I can’t see two buyers fighting over this kitchen,”.

Conclusion: the property market can be crazy, so… it’s really all still to play for.

By far, and although it’s subjective, Karlie and Will’s apartment is the best design. Although it is a stand out and has some amazing features, it is still a ground floor apartment, which might limit the sale price.

Julia and Sasha have a great over design – although possibly not as sharp as Karlie and Will’s and there’s no real reference to the buildings. But all that could be superfluous once you factor in their million-dollar view. Which, although caused many tears, was the right thing to fight for as it maximized their potential and limited another team’s… hey it’s a competition!

My money is on either of these taking the prize, my head says Julia and Sasha and heart says Karlie and Will.

Dan and Carleen are still in the race, some of their deco style will appeal to a particular niche market. Although you might question how well they have integrated more contemporary areas. Based on their style, it’s absolutely possible that a downsizer with money will snap this up. But my gut feel is this isn’t the winning apartment.

Andy and Ben might have that best layout and really good bones. However, the “design king” is hit or miss, so arguably for design savvy buyers it’ll miss the top price tag.

Whilst Kim and Chris have the biggest master suite, they miss some of that penthouse elegance and don’t have the cityscape view in the living areas. I really feel for this team, however, I just don’t think their apartment comes together. They tried too hard to placate the judges (understandable as it’s a competition) but this has resulted in style / overall vision compromises that leave it feeling bitty.

Who do you think will win?